South America Weather Forecast: In Argentina, last evening’s GFS model run was notably wetter in central and southern production areas Nov. 26- Dec. 1.  In Brazil, center west and center south production areas will start to trend drier after Wednesday which will benefit fieldwork advancement; though, greater rain will then be needed; the far south will be driest in week 1 of the outlook; however, this area will then be wetter in week 2. 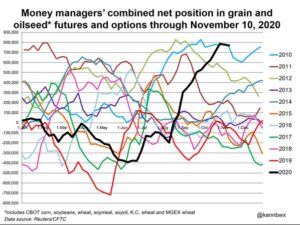 U.S.Winter Wheat plantings were 96% complete versus trade estimates of 97% and 94% average.

The monthly U.S. soybean crush surged to a record high in October, topping all trade estimates, according to data released by the National Oilseed Processors Association (NOPA) on Monday

Tyson Foods says China’s likely to remain a top buyer of US pork exports. China, the biggest global consumer of pork, is trying to rebuild its own hog industry after a deadly swine disease wiped out around 40% of the country’s hog herd, and Tyson Foods CEO Dean Banks says that complete recovery of China’s industry may depend on eradicating the disease there via a vaccine or some other measure; in the meantime, China has banned pork imports from Germany due to concerns about the virus there, shifting more of China’s imports to US supplies

Conditions for Russia’s winter wheat sowings remain tense, especially in part of Volgograd, Stavropol and nearby regions, despite some improvement seen in recent weeks, analysts said; farmers in Russia have been sowing winter wheat in dry soil this year, increasing risks for the 2021 crop; despite some improvement in recent weeks, plants are still in a bad shape overall,” Sovecon agriculture consultancy said; a lot will depend on how harsh this winter will be and how much precipitation we will see; frmers have already sown winter grains for next year’s crop on 99.7% of the planned area, or on 19.1 million hectares, up from 18.1 million hectares around the same date a year ago

Russian wheat export prices edged up last week for the second consecutive week as the agriculture ministry released a draft of its plan to introduce a grain export quota, analysts said; Russian wheat with 12.5% protein loading from Black Sea ports was at $254 a ton free on board (FOB) at the end of last week, up $1 from the previous week, the IKAR and Sovecon agriculture consultancies said.

Soft wheat exports from the European Union and Britain in the 2020/21 season that started on July 1 had reached 8.50 million tons by Nov. 12, official EU data showed; that was 22% below the volume cleared by the same week last year.

Soybean imports into the European Union and Britain in the 2020/21 season that started on July 1 totaled 5.29 million tons by Nov. 12, official EU data showed; that was 2% above the volume imported by the same time in the previous 2019/20 season.

France has detected a highly pathogenic strain of bird flu in the pet section of a shop in one of Corsica’s main cities, the farm ministry said on Monday, in a latest outbreak of the disease in Europe in recent weeks.

Euronext wheat futures touched one-week lows on Monday, curbed by a steady euro and an earlier fall in Chicago, while physical premiums held firm after import tenders sustained international demand; front-month December milling wheat settled down 0.75 euro, or 0.4%, at 209.25 euros ($247.75) a ton, after earlier falling to its lowest since Nov. 9 at 208.25 euros; March futures ended down 0.75 euro at 209.00 euros, after an earlier one-week low at 207.75 euros.

Indonesia is unlikely to proceed with plans to raise the bio-content of its palm oil-based biodiesel to 40% next year as it struggles to fund the program, an energy ministry official told parliament; instead, the Southeast Asian country will retain its biodiesel B30 program which makes it compulsory for diesel in Indonesia to be blended with 30% fatty acid methyl ester (FAME) made out of palm oil next year.