Western Midwest Forecast: Isolated to scattered showers through Monday. Temperatures near to below normal through Saturday, above normal Sunday-Monday.

Black Sea Region Forecast: Showers may get into western areas over the weekend, but most of Russia will be dry until next week. There are pockets of the region that are a bit on the drier side, especially in Russia, which could stress crops a bit, but overall the region is in good shape for now.

Nutrien Ltd, the world’s largest fertilizer producer, said on Thursday it will increase its Canadian potash production by 20% to an annual 18 million tonnes by 2025, helping to address tight supplies that have contributed to a global food shortage.

Potash prices have soared since the West imposed sanctions against Russia for Moscow’s invasion of Ukraine, crimping an already tight fertilizer market.

Russia and Belarus, which also faces sanctions, are the world’s second- and third-largest producers of the crop nutrient, while Canada is the No. 1 producer.

“The world needs these volumes in order to feed people well,” said Ken Seitz, Nutrien’s interim chief executive, at a meeting with investors.

Seitz said it will take at least several years to replenish global crop supplies and for Russian and Belarussian potash trading volumes to return to normal levels.

The potash ramp-up will use Nutrien’s existing mines in the province of Saskatchewan.

Wong estimated the expansion’s cost at $300 million to $900 million.

The company said it was advancing previously announced boosts of its nitrogen fertilizer capacity to add 500,000 tonnes annually by the end of 2025, and is considering further expansion.

Nutrien also said it plans to repurchase an additional $2 billion worth of shares. 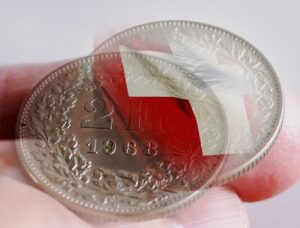 The Swiss are turning to American wheat for the first time in more than a decade as buyers there get nervous about supplies with crops in Europe still a few weeks away from harvest.

Switzerland’s purchase last week of 50,000 metric tons of wheat marks the country’s first such purchase since 2011, according to US Department of Agriculture data. The Swiss typically rely on countries like nearby Germany and France for imports.

The move by the country that prizes its braided zopf bread highlights the anxiety over supplies, as Russia’s war with Ukraine disrupts supplies and puts vulnerable countries at risk of food shortages. Adding to that is the dry weather that’s hampering the outlook for European Union grains. US winter wheat also is smaller than expected due to drought.

Other European countries also have looked to the US for grains since Russia invaded Ukraine in late February. Italy has booked more than 70,000 metric tons of American corn, far exceeding its last sizable buy of about 28,000 tons in 2011, USDA records show.

China trims its edible oil import estimate by 13% to 7.43m tons in 2021-22 due to rising prices of palm and soybean oils in the global market, according to the China Agricultural Supply & Demand Estimates (CASDE).

Planting forecast falls by 2.4% to 6.2m hectares (15.3m acres) from 6.35m in May, the Rosario Board of Trade says in its monthly estimates report

Palm oil stockpiles in Malaysia, the world’s second-largest producer, fell 7.4% to 1.52 million tons in May from a month earlier, Malaysian Palm Oil Board says in statement today.

The share of France’s soft-wheat crop rated in good or very good condition fell to 66% as of June 6 from 67% the prior week, according to FranceAgriMer data.

Indonesia, the world’s largest palm oil producer, has revised its rule on export tax to support a stable price of CPO and its domestic market supply of cooking oil, according to a decree issued by the finance ministry on its website.

But exports have been slow to restart, with confusion over procedural issues and new requirements for firms to join a government bulk cooking oil distribution programme, where a portion of their product goes to the domestic market before export permits can be granted.

Companies that have not joined the programme, however, will still be allowed to ship palm oil, providing they pay a $200 per tonne charge on top of the export tax and levy, senior minister Luhut Pandjaitan said on Friday. (Full Story)

Luhut said the latest concession was to “flush out” and reduce high palm oil inventories that have prevented refiners from buying more palm fruits from farmers, part of its new “acceleration programme”.

Indonesia aims to export at least 1 million tonnes of palm oil products by July 31 under the scheme.

Shipments along the Mississippi, Illinois, Ohio and Arkansas rivers declined in the week ending June 4 from the previous week, according to the USDA’s weekly grain transportation report.

Pressure on FOMC to be Less Hawkish

Grains Mixed as Dollar is Higher