In Brazil, conditions will continue to be mostly favorable for crop development.

In Argentina, a pattern of erratic rainfall will continue. There will be some meaningful moisture that occurs; however, due to the erratic nature of the rain, some areas will also miss out from getting much. Warm temperatures will lead to high evaporation rates and some crop stress will increase in parts of the nation that go at least a few days without moderate or heavy rain.

Condition ratings for winter wheat improved during December in Kansas, but ratings declined in several other Plains states and in Illinois, the U.S. Department of Agriculture said. The USDA issued its last national winter wheat ratings of the season on Nov. 30, reporting 46% of the U.S. crop in good to excellent condition as of Nov. 29.

Ratings declined sharply in Illinois; he USDA rated 50% of the Illinois wheat crop as good to excellent by Jan. 3, down from 79% in late November. 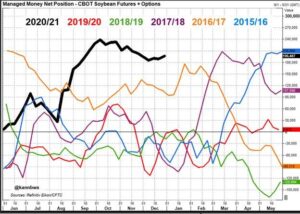 Chicago-traded corn futures have recently been on an unprecedented run partially due to supply concerns in South America, and speculators and other traders have further inflated their already very bullish bets in the process. The most-active CBOT corn contract surged 14% in the second half of December, something not seen in more than three decades.

CBOT soybean futures rallied nearly 11% in the second half of December, the most since 2007, but speculators have hardly adjusted their views.

CBOT wheat hit $6.50-1/4 per bushel on Monday, its highest since December 2014. Wheat has been tracking the grains upward in recent sessions, but traders are also keeping an eye on global export demand as well as prices and shipments out of the Black Sea, the top supplier of wheat.

USDA SAYS 431.7 MILLION BUSHELS OF CORN USED FOR FUEL ALCOHOL IN NOVEMBER, DOWN FROM 456.7 MILLION A YEAR AGO, and 434 MIL BU A MONTH AGO

U.S. renewable fuel credits rose on Monday to a three-year high, traders said, after the Trump administration failed for the second time to meet a deadline to propose rules on the amount of biofuels refiners must blend into their fuel mix this year. Renewable fuel (D6) credits traded at 79.5 cents each on Monday, the highest since December 2017. Biomass-based (D4) credits traded at $1.04 each, highest since November 2017. D4 credits were in part led higher by higher prices for soybeans.

The launch of live hog futures on the Dalian Commodity Exchange this Friday will hopefully reduce price volatility, StoneX’s senior Asia commodity analyst says. Live hog prices fell 30%, then rallied 43%, then fell 25% and then rallied 27% in 2020, he notes. Futures markets often help with volatility as they provide a tool for hedging price movement and allow producers to take a longer term view on pricing.

The Brazilian soybean harvest started timidly in some areas of top producer Mato Grosso state, especially on farms where growers risked planting it earlier to cultivate cotton afterwards, inside a favorable climate window. According to local farmers, harvesting work is behind last year’s pace due to scarce rainfall earlier in the season. Mato Grosso state had collected 25% of the planted soybean area through the end of January in the last year, but that will not be repeated this season.

Argentina’s recently announced suspension of corn exports will not have its intended effect, which was to lower the cost of local staples like steak, the country’s CICCRA meat industry chamber said; Last week Argentina announced it would suspend corn exports until the end of February. The surprise move by the world’s No. 3 corn supplier is part of the government’s effort to control domestic food prices that have been subject to high inflation. But the head of the chamber said the policy should not have any effect on farmers’ selling to local ranchers and dairy farms.

Ukrainian milling wheat export asking prices hit a six-year high at $268 a tonne FOB Black Sea amid high demand from exporters and a significant rise in prices of Russian grain, analyst APK-Inform said; The country’s wheat traded at $265 a tonne FOB in January 2016

Sunoil bid export prices for January-February delivery added about $100 per tonne and reached $1,210 to $1,220 a tonne FOB Black Sea as of Jan. 4. Ukraine’s economy ministry last month said that 2020 sunseed production fell to 13.1 million tonnes from 15.3 million tonnes in 2019. APK-Inform has said it increased its forecast for Ukraine’s sunoil production and exports for the 2020/21 season to 6.219 million tonnes and 5.780 million tonnes respectively.

Soft wheat exports from the European Union and Britain in the 2020/21 season that started in July had reached 12.86 million tonnes by Dec. 31, official EU data showed; that was 15% below the volume cleared by the same week last season

Euronext wheat rose to a two-year high on Monday as worries about reduced export supplies from South America continued to stir grain markets. Front-month March milling wheat on Paris-based Euronext settled up 1.00 euro, or 0.5%, at 214.25 euros ($262.58) a tonne. It earlier climbed to 216.25 euros, a life of contract peak and a highest spot price since August 2018, before paring gains as Chicago futures turned lower after fresh six-year highs in overnight trading.

The Indian government on Monday refused to roll back farm reform laws, prompting farmers to threaten to step up their weeks-long protests, but the two sides agreed to meet again on Friday.

Tens of thousands of farmers have been camping out on roads around the capital, New Delhi, for 40 days, insisting that the government withdraw the reforms and guarantee a minimum support price for their produce.