Malaysian palm oil prices were down 6 ringgit at 3,689 (basis March) on trade positioning.

Conditions will still be very good in much of Brazil. Some pockets of the far south may still become drier than preferred in the second week of the outlook; though, a notable rain event this weekend will support the needs of crops in this part of the nation for a while with the possible exception of a few areas in southern Rio Grande do Sul.

Wire story had a report that anyone looking for fireworks following the U.S. Department of Agriculture’s Tuesday forecasts was not at all disappointed, but for most market participants, the recent trend in some of the numbers might be downright unsettling. The U.S. corn figures were the most surprising in the data landslide published by USDA on Tuesday, particularly for quarterly stocks and 2020 crop yield. Both of those numbers fell considerably below the trade range of estimates, which were historically wide for yield. That locked most-actively traded Chicago corn futures up the daily 25 cents per bushel limit at $5.17-1/4 where it finished the session, and traders reported the contract was trading synthetically through options up another 8 cents. That would make for the highest price in the most-active contract since July 2013.

Quarterly U.S. corn stocks seem to be getting harder to predict, and that appears largely driven by revisions to the previous quarter’s stocks, which is part of USDA’s standard procedure. But the revisions are getting larger, setting up even more uncertainty for future reports. 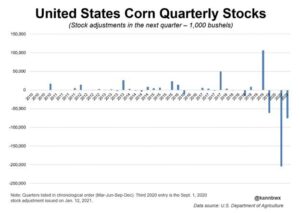 Spot millfeed values stayed firm on Tuesday in truck and rail markets around the United States due to strong demand for animal feed, brokers said.

* Feed costs are rising as tightening estimates for U.S. crop supplies are pushing up corn, soy and wheat prices.

* Wheat-based millfeeds compete with corn for space in feed rations.

* The U.S. Department of Agriculture raised its 2020/21 estimate for wheat used for feed and residual purposes to 125 million bushels, from 100 million last month. If achieved, that would be the most since 2016/17.

Argentina said on Tuesday it lifted a 30,000-tonne-per-day limit recently placed on corn exports, which had caused farmers to go on a sales strike in protest. Growers have withheld crops from market since early Monday, angered by what they said was overzealous intervention in the markets. The government said the curb was intended to ensure ample domestic food supplies and stable prices. As part of a deal negotiated with farm groups and export companies on Tuesday, the agriculture ministry said a commission would be named to monitor domestic corn prices.

The duty on the export of sunflower seeds from Russia in 2021 will be increased. This measure will help keep prices down on the country’s domestic market. The corresponding legislative changes come into force on January 10. Export duties on sunflower and rapeseed seeds from Russia will rise to 30 percent from January 2021.

Ukrainian livestock and poultry producers’ associations have asked the government to limit corn exports in the 2020/21 season to 22 million tonnes to avoid a shortage of animal feed, analyst APK-Inform said. Ukraine’s corn harvest fell to around 29.3 million tonnes in 2020 from 35.9 million a year earlier and producers fear large-scale corn exports could sharply reduce grain stocks and raise corn prices. Ukraine has exported 9.7 million tonnes of corn so far this season, 2.6 million tonnes less than in the same period a season ago. If this volume (of 22 million tonnes) is exceeded, temporary restrictions on corn exports should be imposed to ensure domestic consumption in the volumes necessary to preserve animal husbandry.

Indonesia plans to import 2.6 million tonnes of soybeans this year, the head of the country’s food security agency at the agriculture ministry

Malaysia maintained 8% export tax on crude palm oil in February; the government set a reference price of 3,657.67 ringgit ($904.13) per ton for next month, Malaysian Palm Oil Board said.