South America Weather Forecast: In Brazil, conditions will be favorable in much of the nation for crop development; though, a little concern remains of drier than preferred conditions in western Mato Grosso do Sul. This area will be notably dry through Friday before greater rain occurs this weekend into next week which will be welcomed. The 6 to 10 day sees good rainfall in most of the growing regions. Temps seen average in the north, average to a bit below in the south.

In Argentina, concern remains of increasing dryness in the southern part of the nation in the next two weeks, especially in localized areas. Some shower and thunderstorm activity will occur occasionally; though, much of the rain will likely be erratic. Southern Argentina will receive some rain Thursday from a frontal boundary and Sunday into next Monday from another frontal boundary and this rain will at least help protect crops some from potential dryness in week 2 of the outlook. The first front looks to see light amounts of rainfall with 45% coverage, the second front light to moderate rainfall with 85% coverage. Temps below average over the next 10 days.

The United States on Monday imposed financial sanctions and a travel ban on 14 Chinese officials over their alleged role in Beijing’s disqualification last month of elected opposition legislators in Hong Kong. The move, which was first reported by Reuters overnight and sent Asian stock markets lower, targeted the vice chairpersons of the National People’s Congress Standing Committee (NPCSC), the top decision-making body of the Chinese legislature. The action was widely seen as part of an effort by outgoing President Donald Trump to cement his tough-on-China legacy and also box president-elect Joe Biden, before he takes office on Jan. 20, into hardline positions on Beijing at a time of bipartisan anti-China sentiment in Congress.

China is so hungry for soybeans that it’s started buying U.S. supplies from next year’s crop much earlier than usual. The world’s top importer has been picking up American cargoes over the past week, according to people familiar with the matter, who asked not to be identified because the trades are private. While buyers bought fewer than five cargoes, purchases came earlier than the usual end of the first quarter. China is loading up on U.S. crops from corn to soybeans to feed a hog population that’s recovering from African swine fever, a deadly pig disease, much faster than traders and analysts expected. The Asian nation’s economy is also recovering from the coronavirus pandemic, helping boost demand for food.

U.S. soybean export prices have recently topped six-year highs, which in theory would help China meet its agricultural trade promises to the United States in a speedier fashion. The rally has indeed padded the export values, but they have been far less impactful than the enormous volumes of U.S. soybeans that have sailed to the Asian country in recent months. The Phase 1 trade deal calls for China in 2020 to import a record dollar value of U.S. agricultural products, even more than in 2012 or 2013, which featured some of the highest commodity prices ever observed, well above today’s levels. 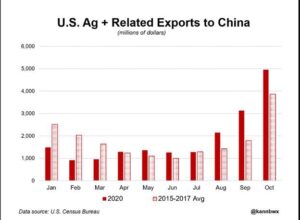 China said on Monday it had suspended imports of beef from Australia’s Meramist Pty Ltd, the sixth supplier to face such a move in a country that is one of China’s main meat suppliers. China, which did not say why it took the latest decision, has already banned imports from five other Australian beef suppliers this year, citing reasons that have included issues with labelling and health certificates.

Growth of beef imports by China will slow to less than 20% next year, a leading industry analyst said on Tuesday, amid lower supplies from key exporter Australia and as the country boosts domestic pork production. China, which accounts for a quarter of the global beef trade, has rapidly expanded its beef imports in recent years, with shipments up 60% last year to 1.66 million tonnes and up 40% this year to date.

Brazilian farmers had planted 90% of the area expected to be sown with the oilseed as of Dec. 3, according to agricultural consultancy AgRural. That was up from 87% a week earlier, and behind the 93% planted on the same day a year ago.

Russian wheat export prices fell slightly last week amid healthy supply from domestic farmers, analysts said on Monday. Russian wheat with 12.5% protein loading from Black Sea ports for supply in December was at $252 a tonne on a free-on-board (FOB) basis at the end of last week, down $2 from the week before, the IKAR agriculture consultancy said; Sovecon, another agriculture consultancy in Moscow, said wheat and barley were steady at $255 and $216 a tonne, respectively.

Ukraine has reported an outbreak of highly pathogenic bird flu among backyard birds in the southern part of the country, the World Organisation for Animal Health (OIE) said. Avian influenza, commonly called bird flu, has been spreading rapidly in Europe, putting the poultry industry on alert after previous outbreaks led to the culling of tens of millions of birds.

Soft wheat exports from the European Union and Britain in the 2020/21 season that started in July had reached 10.44 million tonnes by Dec. 6, official EU data showed; tat was 21% below the volume cleared by the same week last year.

Soybean imports into the European Union and Britain in the 2020/21 season that started on July 1 totalled 6.22 million tonnes by Dec. 6, official EU data showed; tat was 1% below the volume imported in the previous 2019/20

France’s farm ministry on Tuesday estimated the country’s winter soft wheat area for the 2021 harvest at 4.73 million hectares (mln ha), up 12.4% compared with the previous year. In its first sowing estimates for next year’s harvest, the ministry pegged the winter barley area at 1.26 mln ha, up 6.6%. For winter rapeseed, France’s main oilseed crop, the ministry estimated that the area would reach 1.13 mln ha, up 1.0% on the area harvested in 2020.

European wheat futures fell on Monday to touch a two-month low, pressured by improving global supply prospects and strength in the euro, before trimming losses as Chicago futures rose and a chart floor in Paris held. March was down 1.0 euro, or 0.5%, at 201.00 euros ($244.0) a tonne. It earlier slid to 199.00 euros, its weakest level since Oct. 9, as it extended a recent slide into a seventh consecutive session.

Good morning, Yesterday saw another quiet day as the market continued to consolidate around 19.50….

SOYBEANS Soybean futures ended higher. SH is now near 14.75. SH has rallied from a…