Malaysian palm oil prices were up 111 ringgit at 3,208 (basis January) near 4-year highs supported by a steep decline in October stocks and production.

U.S. Weather Forecast: The 6 to 10 day forecast has moderate rainfall in the eastern half of KS, OK, and TX with lighter amounts in the western areas of the region the first half of next week. Moderate rainfall also looks to fall in most of the Midwest with some higher rainfall totals in the central Midwest. Temps will run above average through early next week with cooling to average in the Plains by the middle of next and the Midwest by the end of next week.

Deliveries were 1 contract for Soybeans.

US ethanol production is up 20,000 barrels per day this week, bringing the daily production figure up to 961,000 barrels per day; the uptick is counter to the expectation of grains traders that production would fall as rising coronavirus cases limit fuel consumption; meanwhile, ethanol inventories also rose, possibly a reflection of a resurgent Covid-19.

China’s strong return to the U.S. soybean market in recent months has single-handedly lifted U.S. farm exports to the Asian country to new records, and the heavy forward shipping schedule bodes well for the promises outlined in the Phase 1 trade agreement between the two countries; that agreement suggests China in 2020 will buy and import at least $36.5 billion worth of American agricultural products, an all-time high; progress was relatively dismal through mid-year, but the narrative has since changed.

Democratic U.S. Rep. Collin Peterson, House Agriculture Committee chair, failed to win re-election in Minnesota on Tuesday, a loss some agriculture leaders said could hurt the Midwest grain belt; though Democrats retained control of the House and therefore will again chair the committee, Peterson’s exit could shift U.S. spending away from a region hammered by U.S. President Donald Trump’s trade war with China.

Food prices rose for a fifth consecutive month in October, the United Nations’ Food and Agriculture Organization said; the FAO’s Food Price Index, which tracks prices of the most common food commodities, rose 3.1% in October to 100.9, its highest level since January. 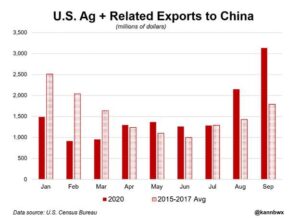 China will import over $22 trillion worth of goods over the next decade, and the country is accelerating its opening up in spite of the global coronavirus pandemic, Chinese President Xi Jinping said; speaking via video message at the opening of the Nov. 5-10 China International Import Expo, or CIIE, an annual import show in Shanghai, he said the world should not let unilateralism and protectionism undermine the international order; we should take a constructive stance to reform the global economic governance system and promote an open world economy.

Most of Ukraine’s winter grain crops sown for the 2021 harvest are in good and satisfactory condition, analyst APK-Inform said, citing weather forecasters; the economy ministry said on Tuesday farmers had sown 5.65 million hectares of winter wheat, or 92% of the expected area as of Nov. 2.