The Ghost in the Machine – A Green Recovery? 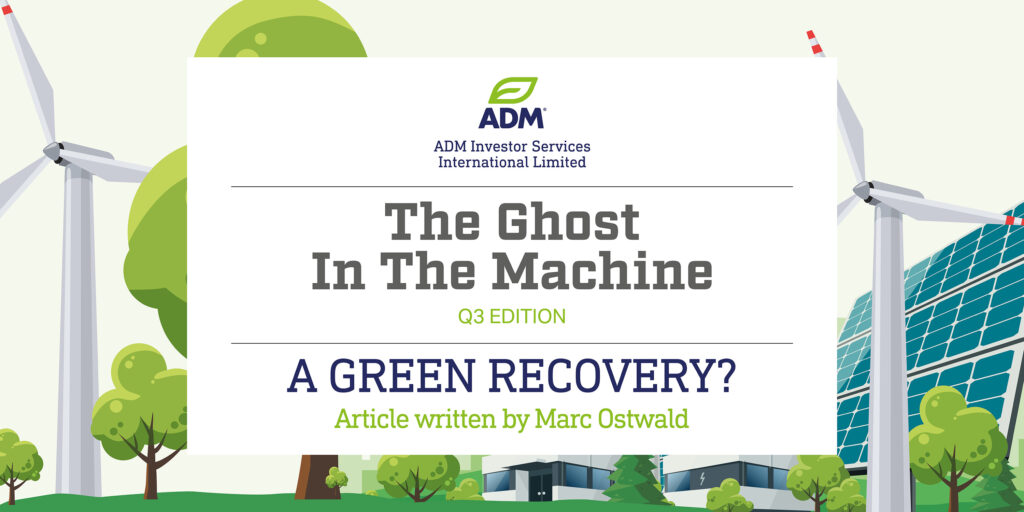 In the June edition, I noted that there was ever increasing debate about a ‘green recovery’ and how the economic costs of an abrupt shift have always been patently obvious, but how the lockdowns in many countries have nevertheless set a precedent for more decisive action. Prior objections based on the cost of a ‘green transition’ fall sharply down the list of key considerations, at least from a government spending perspective, as this is the type of focussed and forward-looking infrastructure investment which will be needed to ‘give wings’ to the post Covid19 recovery phase. It was also noted that there would be numerous and differentiated challenges, in both developed and developing economies, be they related to the migration of energy resources, or prioritisation of other infrastructure needs, which have been often woefully exposed by the pandemic.

So called ‘Green’ energy has something of a chequered history, with the rise and fall of solar PV cell manufacturing industry in Europe in the early party of this century, offering a series of point lessons on the many potential pitfalls in planning and developing such ‘holy grail’ type initiatives. As was the case with solar, the EU with Germany very much in the vanguard, is looking to put ‘hydrogen’ at the forefront of its efforts to become ‘climate-neutral’ by 2050, and the EU is more than well aware that its primary competitor will be China, though Asia will also be in the vanguard. I make no pretence of having any expertise in this area, so this article is primarily a short introduction for other laypeople based on what I have learnt from initial investigations.

For Germany, there is a strong element of self-interest to help transition some of very large engineering companies that have been at the forefront of hydrocarbon energy production into a new era, for example gas turbines are reckoned to be easily converted to hydrogen. As German Economy Minister Altmaier noted earlier in the year “We want Germany to be the global No. 1 in hydrogen technology”; while the EU’s ‘hydrogen strategy’ has the stated aim of create an industry that ‘supports’ up to 1 million jobs, and a multi (tens of) billion Euro market. One might well ask ‘why now’, given that hydrogen fuel cell technology has been around for a number of decades.

The simple answer would be the confluence of necessity (both due to pandemic economic ‘scarring’ and climate change targets), technological evolution and, the fact that it plays into a hunger for investment into the ‘next big idea’, particularly in an environment of a protracted period of ultra-low interest rates and financial repression. That said, there should be no illusions that this is going to be some form of instant success in commercial terms, or in climate terms. The EU strategy paper underlines this, setting targets from a current installed base of just 0.1 gigawatts (GW), of 6.0 GW by 2024, 40.0 GW by 2030 and 500.0 GW by 2050.

As with so many innovations in energy and transport, the key to unlocking hydrogen as a cornerstone of energy production is to fund the investment in the technology that will ultimately bring the sort of scale, which reduces the cost of making renewable hydrogen dramatically. Standardising manufacturing processes will also be a key part of this.

By way of some additional background, there are four type of hydrogen: brown which has been around for hundreds of years, and is a product of coal ‘gasification’, which produces syngas from which hydrogen can be distilled. The only problem is this process also generates large volumes of Carbon Monoxide and Dioxide, and indeed methane, in other words it is very heavy on pollutants, even if quite cheap to produce. Grey hydrogen comes from natural gas and is currently the most common sources, but the catalytic process (also known as SMR ‘steam methane reformation’) that breaks the hydrogen from the hydrocarbons produces a lot of CO2, though it is currently the cheapest thanks to the low price of natural gas. Blue Hydrogen is in principle a variation on Grey, but also use Carbon Capture and Storage (CCS) to eliminate the carbon emissions. The problem is that while CCS does obviate the floating costs of Carbon Tariffs, the vast majority of CCS ‘projects’ are centred around older oil and gas fields. The hydrogen that is produced can help to ‘decarbonise’ the gas, but above all in Europe, there is a lack of common standards. The holy grail of Hydrogen is Green, which by using renewable energy eliminates polluting chemicals completely, by creating hydrogen from water and electricity by electrolysis; but at the current juncture the electrolysis is very costly. The other downside of this currently is that it diverts renewable energy away from the main electricity grids, per se resulting in higher usage of polluting hydrocarbons. This is above all where upscaling is needed on all fronts, initially for the production of electrolysers on a much broader scale, which in turn can be used in so called ‘hydrogen valleys’ to produce Green Hydrogen initially for heavy energy usage industries (such as steel, and oil and chemical refineries), before widening the supply to other industries.

In other words, the critical initial step is to create the infrastructure for production. The natural train of thought is how this might be applied to the auto sector, in which it will like play a potentially critical role, with the battle between traditional battery EVs and those utilising hydrogen fuel cells likely to be a brutal one, above all in terms of providing the refuelling infrastructure.  However it is the transportation sector, be that haulage, buses or aeroplanes, where the impact may be largest, and again where the impact may be most substantial in terms of emissions reductions.

As I do more research into the sector, there will be further articles, but as a summary of where hydrogen can and will likely be deployed, this graphic from Bloomberg’s New Energy Forum (NEF) is a good point at which to conclude. 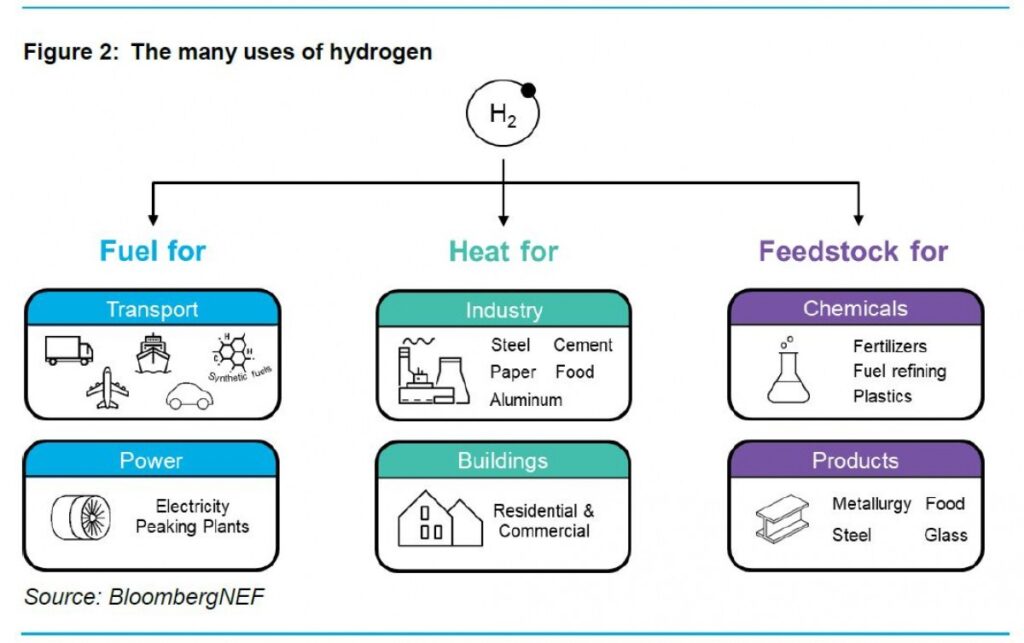 Read The Ghost in the Machine