South America Weather Forecast: Argentina and Brazil received insignificant precipitation during the Friday through Sunday morning period and temperatures were warm enough to accelerate drying across both countries; limited rain and warm weather during the weekend has further depleted soil moisture and raised stress for recently emerged crops; the next ten days of rain will be of critical importance for grain and oilseeds; confidence is high that all of these areas will get rain sufficient to maintain crop development except in far southern Brazil and eastern Argentina.U.S. Weather Forecast: Rain with some snow and sleet will occur in the western U.S. Corn Belt early this week before shifting to the Great Lakes region during mid-week; moisture totals will vary from 0.30 to 1.25 inches with local totals approaching 2.00 inches. Very little precipitation will occur in the Great Plains from the Dakotas through eastern Colorado and western Kansas to western Texas; these areas will not be totally dry, but the light precipitation expected will be brief having little impact on winter crop conditions or establishment; these areas will continue drier biased through Nov. 20 and perhaps into the week of Nov. 22.

Deliveries were 6 contracts for Soybeans.

U.S. farmers are likely to expand plantings of soybeans and wheat while slightly reducing seedings of corn for the upcoming marketing year, the U.S. Agriculture Department said 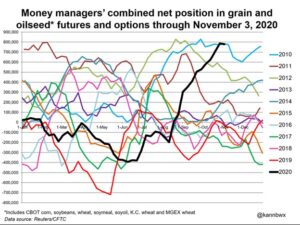 China’s soybean imports jumped 41% in October from a year ago, according to data from the General Administration of Customs, as delayed Brazilian cargoes cleared customs and U.S. soybean arrivals grew; China brought in 8.69 million tons of the oilseed in October, up from 6.18 million tons in the same month of the previous year, as crushers booked Brazilian beans earlier on good crush margins and as more U.S. beans started to flow in; the figures were down from 9.8 million tons in September, as shipments from Brazil started to dwindle with the harvest season in South America approaching an end.

Imports of vegetable oils were 885,000 tons in October, down 3.9% from the previous month.

Brazilian soybean producers have already sold 55.1% of the expected soybean crop for the 2020-2021 growing season as of Friday, according to agricultural consultancy Safras & Mercado; that compares to 34.6% on the same date last year and the average of 30.3% for the date; Safras forecasts Brazil will produce a record crop of 133.5 million metric tons of soybeans in the 2020-2021 season, for which planting is already underway.

Higher grain costs are seen weighing on protein processors like BRF SA and JBS SA when they report third quarter results next week even as export markets stayed strong in the three-month period; while China remained a key export destination buying ever-larger meat volumes from Brazil and other origins, it is now paying lower premiums, according to a Nov. 2 report from a HSBC analyst; the weaker Brazilian real is a double-edged sword that has made Brazilian protein exports more competitive globally, but also increased input costs; China has been able to negotiate lower prices and absorb higher quantities as it continues to face African swine fever (ASF) pressures; Corn, another key livestock feed ingredient, soared 46% in local currency over the third quarter.

Ukraine has exported 17.13 million tons of grain so far in the season running from July 2020 to June 2021, 14.5% down on the same period last season, the economy ministry said; it said exports had fallen because of lower corn shipments.

Ukrainian wheat and corn export prices were almost unchanged over the last week due to improving prospects for the 2021 harvest, APK-Inform agriculture consultancy said; Ukrainian 12.5% protein Black Sea wheat prices traded at $252-$256 per ton FOB Black Sea at the end of last week; for the lower-quality 11.5% protein wheat, prices were between $250 and $252 a ton FOB.

The European Union is likely to impose tariffs on $4 billion of U.S. imports next week after an award by the World Trade Organization in a dispute over subsidies for aircraft maker Boeing, EU diplomats said.