Malaysian palm oil prices were up 63 ringgit at 3,438 (basis April) on ideas of weaker supplies.

Brazil weather looks nearly ideal except for some delay in harvest progress in part of northern and eastern Mato Grosso, Goias and Minas Gerais.

For Argentina concern is greatest over dryness in the southwest for this week and a close watch over potential rainfall in central areas for next week is warranted since crops in that area could become stressed later this month without returning rain.

The United States exported $28.75 billion of agricultural goods and related products to China in 2020, data from the U.S. Department of Agriculture showed on Friday, missing the $36.5 billion targeted under the Phase 1 trade deal. Beijing and former U.S. President Donald Trump signed the deal in January 2020 after two years of acrimony and a steep slump in imports by one of the biggest buyers of U.S. farm goods. The missed target was widely anticipated despite a recent uptick in sales of corn and soybeans to China. U.S. President Joe Biden’s administration has said the deal is under review.

Wire story reported speculators eased optimism in Chicago-traded corn futures last week as the historic, multi-month futures rally slowed ahead of the U.S. government’s next supply and demand update due on Tuesday. 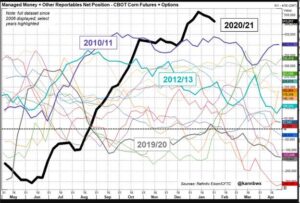 China’s most-active hog futures contract surged more than 4% in early Monday trade as recent reports highlighted severe disease outbreaks in the world’s largest pig herd, fuelling investor concerns about pig supply and bets that prices will rise. The contract broke above 27,000 yuan ($4,180.34) per tonne, its highest since trading on the Dalian Commodity Exchange launched last month. The rally, which began late last week, is being driven by intense discussion in China’s pig industry on the extent of disease in the country’s hog herd

Rains in Brazil that have slowed harvesting and transportation of the 2020/2021 soybean crop will continue throughout February, causing potential disruptions in the world’s largest producer and exporter of the oilseed, analysts said. The heavy rains, which can cause trouble for Brazil’s truck-dependent soy shipping, may give an edge to soy farmers in rival exporters such as the United States. While Brazil’s soy harvesting moves at the slowest pace in 10 years, vessels are lined up at ports such as Santos and Paranaguá, which are expected to ship some 8.5 million tonnes of the soybeans this month.

Russia’s plan to control food inflation by curbing grain exports is following a potentially damaging path trod by rival producer Argentina, threatening valuable sales to major customers such as Egypt, traders and analysts said. With global food prices at their highest in more than 6 years as economies battle fallout from the COVID-19 pandemic, some governments have already taken action to tackle surging domestic prices. Such moves reduce supplies for international markets, and the consequence is already evident with grain prices hitting multi-year highs. Russia, the major wheat exporter, will begin taxing exports from Feb. 15, initially by applying a fixed tariff before switching to a formula-based system from June 2, which may make it difficult for traders to secure forward sales.

Ukrainian soft milling wheat export prices have fallen by $10-$11 per tonne over the past week mostly due to a jump in Russian grain exports ahead of forthcoming exports restrictions, APK-Inform agriculture consultancy said. Asking prices for Ukrainian-origin 12.5% protein wheat stood at $280 to $288 per tonne FOB Black Sea. Lower quality 11.5% wheat quoted between $278 and $286 per tonne. APK-Inform said export prices for Ukrainian corn and barley remained almost unchanged at $264-$270 and $249-$257 FOB Black Sea respectively.

Ukrainian sunflower oil asking export prices lost between $10 and $15 a tonne over the past week, following a global downward trend, analyst APK-Inform said on Monday. It said Ukrainian-origin sunoil prices fell to a range of $1,285 to $1,295 per tonne FOB Black Sea with delivery in February-March. The consultancy last month increased its forecast for Ukraine’s sunoil production and exports for the 2020/21 season to 6.219 million tonnes and 5.780 million tonnes, respectively. Ukraine produced 7 million tonnes of the commodity in the 2019/20 season and exported 6.632 million tonnes.

Vietnam has culled more 100,000 poultry so far this year in a bid to contain the spread of bird flu in the Southeast Asian country, the government said. The country has reported outbreaks of the highly pathogenic H5N1 and H5N6 bird flu strains in 14 provinces. The risk for the outbreaks to spread on a larger scale is very high.

Major palm oil buyers are seeking to block FGV Holdings and Sime Darby Plantations from their global supply chain after the United States banned imports from the two Malaysian producers. U.S. food company General Mills said it has issued global ‘no buy orders’ for both the companies, and the sources said other buyers have also requested suppliers to reduce or exclude FGV and Sime Darby products for supplies entering not only the United States, but also Europe, Australia and Japan. FGV and Sime Darby are two of the world’s biggest palm oil producers and both were banned by the U.S. Customs and Border Protection (CBP) last year over the alleged use of forced labor during production.