Macroeconomics: The Day Ahead for 26 October

While the run of Q3 earnings around the world remains a focal point, it is the political shifts in the UK and China, the war in Ukraine, along with ongoing speculation on when and where the Fed might to ease back on monetary policy tightening, which are the key themes. The day’s statistical run is rather light and unlikely to have anything more than a passing impact, with just Australia’s CPI to digest ahead of French Consumer Confidence, US Goods Trade Balance and New Home Sales (the former likely to prompt some last minute revisions to forecasts for tomorrow’s advance Q3 GDP data). The Bank of Canada kicks off this week’s run of G7 rate decisions, while rates are seen on hold in Brazil, and the Bank of Namibia is likely to mirror the recent SARB decision and hike rates a further 75 bps. Large cap Banks – Barclays, Deutsche, Santander, Standard Chartered and Unicredit – and a host of other non-financials – BASF, Heineken, Iberdrola, Mercedes Benz, Puma and Royal Unibrew – top a busy run of European corporate earnings, while across the pond Boeing, Ford, Hilton Worldwide, Seagate and Twitter are likely to be grabbing some of the headlines. Govt bond supply takes the form of UK 7-yr, Italian 2-yr and inflation-linked, and US 5-yr and 2-yr FRN, while the focus in the weekly EIA petroleum inventories will be on products (seasonally super low) rather than crude. Notably the tension between the US and Saudi Arabia, following the OPEC+ production cut, rose a little further yesterday as the Saudi Energy Minister stated at the Riyadh Summit (aka ‘Davos in the Desert’) “People are depleting their emergency stocks and using them to manipulate the market when their original purpose was to alleviate supply shortages” (without directly naming the US), adding that ‘using emergency stocks may become painful in the months to come”, while echoing IEA’s Fatih Birol in saying ‘the current crisis may be the worst energy crisis”.

By contrast to the ECB and BoJ, there is some ambivalence about the size of this week’s BoC rate hike, with the consensus looking for 50 bps to 3.75%, while markets are priced above 4.0%, with a further two 25 bps hikes seen in December and January. 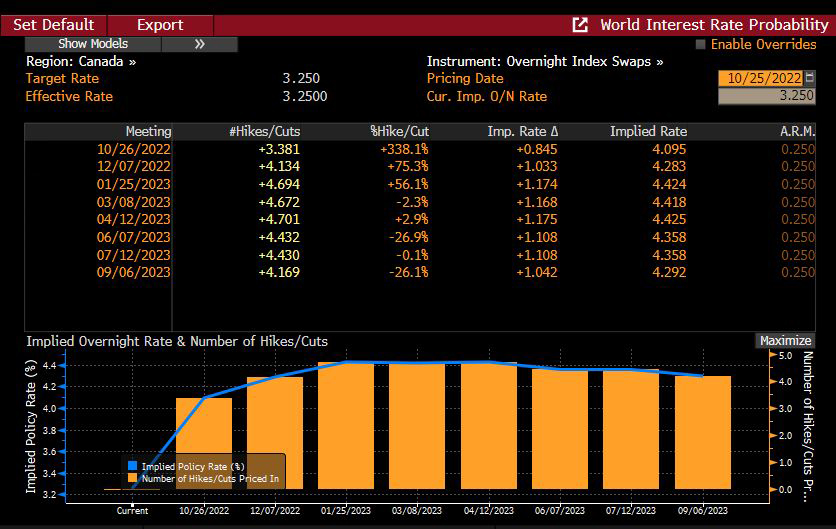 Much may depend on how much the accompanying Monetary Policy Report (MPR) revises down growth and inflation forecasts relative to July, as is widely anticipated. The BoC may above all be mindful of not adding to downward pressure on the CAD with a smaller hike, though this will have to be balanced against what has a dramatic slump in the domestic housing market since it started to hike aggressively.

Yesterday’s run of data perhaps opens up a window for the Fed to temper its hawkish, despite the fact that Friday’s (backward looking) PCE deflators will hardly offer any such support. The accelerated fall in house prices (CoreLogic CS posting a record fall of -1.3% m/m following July’s -0.7%, FHFA -0.7% following -0.6%) renders the lingering upward pressure on OER an irrelevance. That said, the Wages component of Friday’s Employment Cost Index would remain a key bar to any move to ease up on their rhetoric, if as seems likely it accelerates from Q2’s already high 1.4% q/q. While the drop in Consumer Confidence was a little large than expected, it remains well above its July low, but the relatively sharp fall in the Labour Differential from September’s 38.1 to a still robust 32.5, but below pre-pandemic peaks and a long way below March’s 47.1 suggesting a more significant easing in the labour market. As was signalled by Brainard’s speech (and all the commentary from Yellen on Treasury market liquidity issues), Financial Conditions are moving towards centre stage in the FOMC’s policy considerations, with the GS Financial Conditions measure above the 2018 pivot level (see chart). Clearly the Fed does not want to trigger a sharp easing in conditions, as it gets closer to its rate peak, thus emphasizing that once that apex is reached, there will be no about turn for a protracted, in contrast to 2019 and before. FX markets have probably been burnt one too many times this year in trying to discount a Fed pivot, and it remains the case that a change in the USD’s fortunes requires not only some tempering of Fed speak, but also some tentative signs of the BoJ relenting on its super easy policy stance – as ever, it does take two to tango.

To view the full report and to sign up for daily market commentary please email admisi@admisi.com

The information within this publication has been compiled for general purposes only. Although every attempt has been made to ensure the accuracy of the information, ADM Investor Services International Limited (ADMISI) assumes no responsibility for any errors or omissions and will not update it. The views in this publication reflect solely those of the authors and not necessarily those of ADMISI or its affiliated institutions. This publication and information herein should not be considered investment advice nor an offer to sell or an invitation to invest in any products mentioned by ADMISI.