Macroeconomics: The Day Ahead for 25 January

The data schedule is relatively light today, with the overnight Antipodean CPI readings and delayed UK November and December PPI to digest, and only Germany’s Ifo survey ahead. The events schedule has the as expected no change rate decision in Sri Lanka and 25 bps rate hike in Thailand to digest, with a forecast update from Germany’s Economy Ministry (2023 GDP seen upgraded to +0.2% y/y vs. October’s -0.3% y/y estimate – but still around zero!) and the Bank of Canada rate decision ahead. Another busy day for corporate earnings features: Tata Motors/JLR, and Tesla topping the US run which also sees results from Abbott Laboratories, AT&T, Boeing, Freeport-McMoRan, IBM, Kimberly Clark, NextEra Energy, Norfolk Southern and Seagate. Govt bond supply takes the form of 16 & 21-yr from Germany, and 5-yr and FRN 2-yr in the US. In terms of the overnight Australia and NZ inflation data, while the Australian Dec and Q4 CPI data were well above forecasts on both headline and core, this should be the peak, but on the other hand argue strongly for a further 25 bps rate hikes in February and March (against prior speculation of a February pause), above all given the breadth of pressures, particularly in travel and leisure. While the New Zealand CPI readings did not jump as much as the RBNZ has been forecasting, both 7.1% y/y headline and Q4 core non-Tradeable CPI up 1.5% q/q, the RBNZ is unlikely to ease up much on its hawkish rhetoric. Both serve as a reminder that markets betting on G10 central banks pausing or even stopping rate hikes during the quarter are vulnerable to disappointment. A cursory look at the attached chart of Financial Conditions in the US, Eurozone and Japan highlights a) that they have loosened at the start of 2023, and b) and in the US financial conditions are back where they were when the Fed started its tightening cycle. 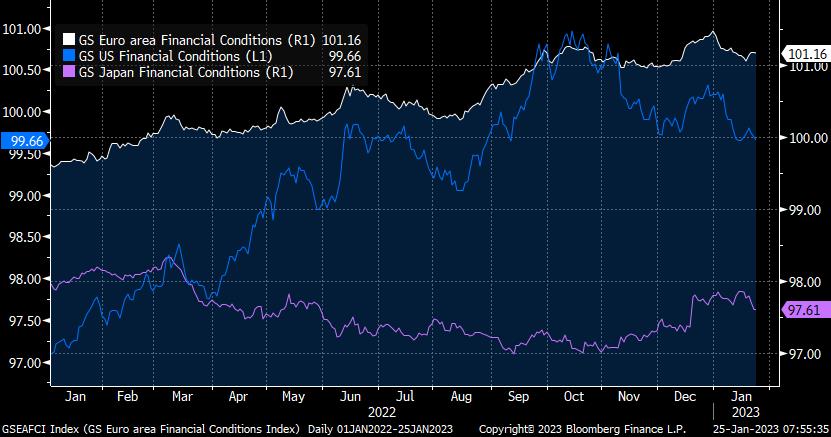 To a large extent, this not only attests to markets fighting Fed and ECB’s hawkish rhetoric, but also to the fact that the vast bulk of the additional QE pumped in during the worst of the pandemic remains in place, and that it may require a good deal more QT before it impinges rather more significantly on markets’ “animal spirits”, i.e. risk appetite.

** Germany – January Ifo Business Climate **
The headline Ifo Business Climate is expected to improve for a fourth month in a row to 90.3 from 88.6, with Expectations doing the heavy lifting (85.3 vs. Dec 83.2), while Current Conditions are seen edging up to 94.9 from 94.4. Yesterday’s PMIs sent mixed signals (Manufacturing little changed, Services edging back up over 50.0), and as previously noted the two surveys often diverge in month to month terms. But as the attached chart highlights, there is still some distance before the index return to the lower end of the 10 year range prior to the pandemic.

** Canada – BoC rate decision **
The Bank of Canada is expected to hike a further 25 bps to 4.50%, though markets are only pricing an 80% probability, and with all eyes on whether it signals a pause, given that it was already quite conditional about hiking today at its previous meeting. The very robust 104K gain in Dec Employment and Dec core CPI measures barely moving lower to 5.0% (median) & 5.3% (trimmed mean) y/y should be sufficient to justify a hike, along with a less negative growth outlook for the US and global economy, even if the BoC’s quarterly Business Outlook survey showed a renewed setback close to the 2008 & 2020 lows, and the domestic housing market is clearly in something of a downward spiral. It is likely to retain a tightening bias, but not signal a further rate hike at the next meeting, the question is how hard it leans against markets discounting 50 bps of rate cuts (from 4.50%) by year end. The focus will also be on the Monetary Policy Report with its updated forecasts, and the Macklem / Rogers press conference at 16:00 GMT, while in 2 weeks the BoC will publish its first ever set of policy meeting minutes.

To view the full report and to sign up for daily market commentary please email admisi@admisi.com