Malaysian palm oil prices were down 98 ringgit at 2,772 (basis January) following rival vegoils, concerns over slowing import demand from India and others.

U.S. Weather Forecast: The 6 to 10 day forecast for the Midwest has widespread rains to fall across the region with a system to occur later Sunday into Monday of next week. Rainfall totals look moderate with 100% coverage. Temps over the next 6 to 10 days look to mostly be running below average with some average to above average in the far east. The Southern Plains over the 6 to 10 day period has light to moderate rainfall in the eastern half of KS, OK, and TX with possible lighter amounts in the west. Temps will run above average for most of the week before falling to below average for the weekend and early next week.

Europe/Black Sea Region Forecast: Europe weather will be drier biased this week in the eastern half of the continent, including Ukraine; Western Europe will trend wetter in the second half of this week after a relatively dry start to the week. Long-awaited rains arrived in part of Russia’s winter wheat-sowing regions over the weekend after dry weather, the head of the IKAR agriculture consultancy said; more rains are still needed in these regions; farmers in part of Russia have been sowing winter wheat in dry soil this autumn which signals risks for the 2021 grain crop.

For the week ended October 8th, U.S. All Wheat sales are running 9% ahead of a year ago, shipments up 6% with the USDA forecasting a 1% increase on the year.

For the week ended October 8th, U.S. Corn sales are running 156% ahead of a year ago, shipments 70% ahead with the USDA forecasting a 31% increase.

For the week ended October 8th, U.S. Soybean sales are running 142% ahead of a year ago, shipments up 86% with the USDA forecasting a 31% increase on the year.

Damage estimates from a rare wind storm that slammed Iowa and some other parts of the Midwest in August are growing, with the total now at $7.5 billion, according to a new report; the Aug. 10 storm hit Iowa hard but also caused damage in Illinois, Ohio, Minnesota and Indiana; the National Oceanic and Atmospheric Administration said it’s currently the second-costliest U.S. disaster so far in 2020, although cost estimates for widespread wildfires along the West Coast aren’t yet available.

Speculators have been flirting with record optimism in Chicago-traded soybeans for a couple of weeks, though they finally broke their bean-buying streak last week as futures hit 2-1/2-year highs. However, investors’ bullish corn run is still alive. 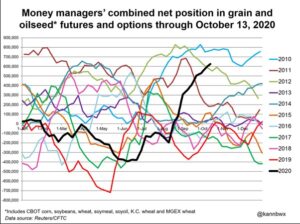 China’s third-quarter pork production rose 18% from a year earlier to 8.4 million tons, according to Reuters calculations based on official data, pointing to the first signs of recovery in the world’s top producer; it was the first quarter since July-September of 2018 to show a year-on-year increase in pork output, after an epidemic of African swine fever swept through the country’s hog herd, causing production to plunge.

Brazil will suspend tariffs on corn and soy imports from countries outside the Mercosur trade bloc until early next year to help reduce food prices that are pushing up inflation, the economy ministry said on Saturday; the decision to remove the tariffs temporarily was taken late on Friday at a meeting of Gecex, a technical body within the economy ministry; soybean meal and soy oil imports will also be exempt along with soy imports until Jan. 15, 2021, while corn imports will cease paying the tariffs until March 31, 2021; both measures are aimed at containing high prices for food.

Workers at a meat plant in southern Brazil accepted a 2.05% pay rise offer made by Brazil’s BRF SA, averting the risk of a strike at the company’s massive turkey and chicken processing facility in the southern town of Chapecó, a union leader said; BRF confirmed acceptance of its offer after it was put to a workers’ vote this afternoon, but did not go into detail.

Livestock suppliers in Brazil are producing more while using less land, as concerns mount about straining natural resources to produce food to feed a growing world population, the global chief executive of the world’s largest meatpacker JBS SA, said; in remarks made during a panel discussion to mark World Food day, meat production in Brazil tripled on a per hectare basis between 1990 and 2019; last month, JBS launched a 1-billion real fund to foster social and economic development in the Amazon, an initiative that the company says will help support local communities while also ensuring livestock production does not destroy the rainforest.

Russia’s October exports of wheat, barley and maize (corn) are estimated at 4.85 million tons, down from 5.65 million tons in September, the SovEcon agriculture consultancy said.