Brazil’s bottom line is good for summer crops from northern Rio Grande do Sul to southwestern Sao Paulo and northward to Mato Grosso and Goias. Some areas may become a little too wet. Most grain and oilseed production areas will benefit from rain except possibly some of the early maturing soybean and corn production areas where harvest delays are possible.

Argentina’s bottom line is mostly good. Last week’s rainfall was well distributed, although not enough to fully restore soil moisture to normal. It was sufficient to restore favorable crop development conditions. Crops have likely responded well to the combination of newly found moisture and seasonable temperatures. Crop stress has been sufficiently eased, although there will be some returning stress later this week and into the weekend as the ground steadily dries and temperatures turn hotter. Late January and February weather will still be critical in determining yields and a close watch on that period is warranted. 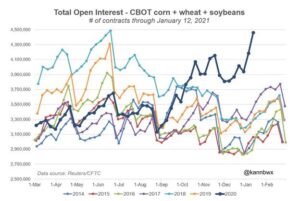 Speculators last week continued their uber-bullish run in Chicago-traded corn while end users were forced to buy supplies at painfully high prices, though commodity funds were less friendly to soybeans despite the price surge.

Analysts, on average, had been expecting the December crush at 185.175 million bushels

The oil stocks were just short of the average trade forecast of 1.712 billion lbs

China bought a record 11.3 million tonnes of imported corn last year, including 2.25 million tonnes in December alone, according to General Administration of Customs data. Corn imports in 2020 were more than double the previous year’s volume and exceeded their annual quota, which was set at 7.2 million tons, for the first time.

In 2019, China only used 67% of its annual quota for corn and one-third of its quota for wheat.

China’s pork output fell less than expected last year as it recovered from the impact of an incurable hog disease that depleted breeding stock, official data showed on Monday. China’s 2020 pork output declined by 3.3% from a year earlier to 41.13 million tonnes after plunging 21% in 2019, the National Bureau of Statistics (NBS) said. Some analysts expected a bigger fall in 2020 after an outbreak of African swine fever hit China in mid-2018 and meant the country’s breeding stock had declined an estimated 60% by mid-2019.

Brazilian soy farmers, who started planting late because of dry weather in the final months of 2020, have harvested only 0.4% of the cultivated soybean area this season, agribusiness consultancy AgRural said; Brazil had harvested 1.8% of the sown area at this time last year, AgRural’s statement said, though the country sowed a record high of more than 38 million hectares (93.9m acres) for the 2020/2021 cycle.

The harvesting of summer corn reached 3.4% of the area in the Center-South of Brazil, up from the 2.5% at the same time last year, AgRural said. Most of the work was done in Rio Grande do Sul and Santa Catarina, where initial yield reports indicate a degree of crop failure because of climate issues

Russian wheat export prices rose sharply last week ahead of a new export tax imposed; Moscow is trying to curb domestic food inflation triggered by the COVID-19 crisis by introducing a range of grain export taxes, with the wheat export tax of 25 euros a tonne from Feb. 15 to March 1 set to double from the start of March. Russian wheat with 12.5% protein loading from Black Sea ports for supply before mid-February was at $298 a tonne free on board (FOB) at the end of last week, up $23 from the previous week, the IKAR agriculture consultancy said; Sovecon, another Moscow consultancy, said wheat rose by $25 to $286 a tonne.

Russia’s January exports of wheat, barley and maize (corn) are estimated at 3.9 million tonnes, down from 5.1 million tonnes in December, the SovEcon agriculture consultancy said.

Russian exports of wheat increased to 33.7 million tonnes in the first eleven months of 2020 from 29.2 million tonnes a year ago, official customs data showed.

Russia’s decision to raise and extend a tax on wheat exports deals a blow to importers and consumers, as higher prices for the staple stoke food inflation in economies reeling from the COVID-19 pandemic. The World Bank said last month that food price increases, combined with reduced incomes, had aggravated chronic and acute hunger, hitting vulnerable households in almost every country. World food prices rose for a seventh consecutive month in December, leading the United Nations food agency monthly index to a five-year high.

Ukraine wheat flour exports fell by 56% in the first six months of the 2020/21 July-June season, analyst APK-Inform said. Export volume totalled 79,500 tonnes and the main destination was United Arab Emirates with imports of 15,300 tonnes, the consultancy said. Exports reached 182,500 tonnes during the same period of the previous season.

Ukrainian milling wheat export prices added $3 a tonne on Friday amid rising global prices after Russia said it intended to increase export taxes, analyst APK-Inform said. Asking prices for soft milling wheat with 12.5 protein stood at $284-$293 per tonne FOB Black Sea, the consultancy said in a report. Bid prices varied between $278 and $286 per tonne. “The key factor supporting prices was the expectation of an increase in export duties on grain in Russia.

Ukraine’s economy ministry and agricultural unions will decide on Jan. 25 whether to limit corn exports in the 2020/21 marketing season, a move called for by animal feed and meat producers, the ministry said. Domestic livestock and poultry producers’ associations last week asked the government to limit corn exports in the 2020/21 season to 22 million tonnes to avoid a shortage of animal feed. Ukraine’s corn harvest fell to around 29.3 million tonnes in 2020 from 35.9 million a year earlier and producers fear large-scale corn exports could sharply reduce grain stocks and raise corn prices. The ministry said Ukraine needed around 7.5 million tonnes of corn to cover all local needs.

Ukrainian corn export prices have hit a seven-year high, supported by a jump in demand, Argentina’s decision to suspend shipments and Russian plans to impose export duties on grains, analyst APK-Inform said on Saturday. Asking prices have risen by $23-$26 per tonne so far in January, reaching a record $256-$264 per tonne FOB Black Sea. The current level is $6-$10 higher than the previous record registered in May 2014, the consultancy said in a report. APK-Inform said earlier on Saturday that Ukrainian milling wheat export prices added $3 per tonne on Friday amid rising global prices after Russia said it would hike export taxes.

Ukraine’s sunflower oil exports have risen by 12% to 2.2 million tonnes in the first four months of the 2020/21 production year thanks to high foreign demand, analyst APK-Inform said on Monday. Ukraine is the world’s biggest sunoil exporter and supplied 6.632 million tonnes of the commodity abroad in the 2019/20 September-August season. The consultancy said Ukraine exported 594,000 tonnes of sunoil in December.

European Union soybean imports in the 2020/21 season that started last July had reached 8.04 million tonnes by Jan. 17, data published by the European Commission showed. That compared to 7.66 million cleared by the same week last season

Bangladesh will step up wheat purchases from Ukraine to make up for any shortfall in supplies from Russia which has announced plans to impose a higher export tax on the grain from March 1, a senior Dhaka-based government official said.

The world’s top producers of palm oil, Indonesia and Malaysia, are looking to join forces for the first time to run an advocacy campaign in Europe, where increasingly tight regulations are threatening sales in their third biggest market. Through the platform of the Council of Palm Oil Producing Countries (CPOPC), the two countries have sent out a request for proposals to hire an advocacy firm to run a campaign in Europe this year to counter criticism.

Palm oil prices will likely average at 11-year high of 3,050 ringgit ($753.6) per ton in 2021 due to tight supply and strong consumption before easing next year on the back of higher production, Fitch Solutions said. Palm oil prices are expected to continue easing in the near term from the current levels as demand from China and India drops due to uncompetitive prices. Output will pick up in Southeast Asia in the second half of this year, while prices of key substitute soybean and soy oil prices are likely to drop later this year. However, it will take time for stocks to rebuild given that they come from multi-year lows and as consumption growth will be strong this year, which will keep palm oil prices supported in 2021 relative to previous years.