Chinese Ag futures (May) settled down 10 yuan in soybeans, up 6 in Corn, unchanged in Soymeal, down 108 in Soyoil, and down 148 in Palm Oil.

Malaysian palm oil prices were down 102 ringgit at 3,425 (basis March) on ideas of slipping exports.

In Brazil, conditions will still be very good in most areas. Some pockets of Rio Grande do Sul may become a little too dry occasionally; though, rain will occur often enough to prevent crop stress from becoming serious.

In Argentina, a meaningful and needed rain event will occur in much of the nation Friday through Saturday. An exception will be in La Pampa; though, some locally meaningful rainfall is occurring in this province this evening and tonight. A lengthy period of dryness will still follow the rain event leading to some increase of crop stress, especially in pockets of the region that miss out from getting much rain this week. Rain is still likely to return to Argentina in the last week of this month; though, confidence in the significance of this rain is also still low.

Argentine soy and corn fields have benefited from recent rains, with more showers expected that could slowly improve crop yields after they were threatened by dry weather earlier in the season, local climate experts said.

Russia may impose a higher export tax on wheat from March 1, its economy minister said on Friday, in another push to curb domestic food price growth amid the COVID-19 crisis. A review by Moscow officials of previously approved state measures to slow food inflation has supported global wheat prices this week on expectations that the wheat of other countries would benefit from a higher Russian tax.

All U.S. Wheat sales up 8% vs a year ago; shipments down 1%; with the USDA forecasting a 2% increase.

The U.S. soybean crush likely rose in December to the second-highest level on record for any month, capping the busiest year of processing ever for the industry

Business for U.S. corn and soybean exporters has turned around drastically from last year’s dismal performance thanks to robust global demand, and the strong early sales paces have eased commitment pressure for the second half of the marketing year. The U.S. Department of Agriculture on Tuesday increased 2020-21 U.S. soybean exports by 30 million bushels to a record 2.23 billion bushels, a move traders largely expected based on strong sales and shipments.

The U.S. Environmental Protection Agency said on Thursday it would propose to extend deadlines for refiners to prove compliance with biofuel laws, but signaled it would not decide on a slew of pending waiver requests submitted by the industry. The agency’s proposal represented mixed news for refiners hard hit by slumping energy demand during the coronavirus pandemic and eager to sidestep regulatory costs associated with U.S. biofuel blending policy. It also marks one of the last actions from President Donald Trump’s EPA before he leaves office on Jan. 20. The agency said it is proposing to extend the compliance deadline for 2019 biofuel blending obligations to Nov. 30, 2021, and an associated deadline for submission of attest engagement reports to June 1, 2022. The EPA is also proposing to extend the 2020 deadlines to Jan. 31, 2022, and June 1, 2022.

The International Grains Council (IGC) on Thursday cut its forecast for a record global grains production by 9 million tonnes to 2.21 billion tonnes in 2020/21 and also trimmed its projection for consumption during the season.

In its monthly update, the inter-governmental body cut its forecast for corn (maize) by 13 million tonnes, partially offset by an upward revision in the outlook for wheat.

Global consumption of grains in 2020/21 was lowered by 5 million tonnes to 2.216 billion tonnes but remained above the prior season’s 2.192 billion. Grain stocks were seen dipping to a five-year low of 611 million tonnes. 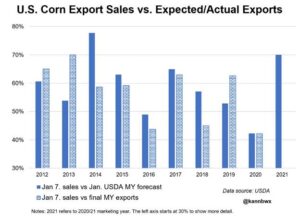 The Indian government will hold new talks with the leaders of tens of thousands of farmers camped on the outskirts of New Delhi for almost two months protesting for the repeal of new agricultural laws they say threaten their livelihoods. Prime Minister Narendra Modi’s government has been urging the farmers to end their protest over the laws introduced in September, but the farmers say they will not relent on their demands, as the bills are designed to benefit private buyers at the expense of growers.

Malaysia’s palm oil exports during the Jan. 1-15 period are estimated to have fallen 44.4% on month to 403,255 metric tons, cargo surveyor SGS (Malaysia)