Malaysian palm oil prices were down 78 ringgit at 3,614 (basis March) at midsession.

In Brazil, conditions will continue to be very good in most areas. Some pockets of the far south may become a little too dry occasionally; though, rain will occur often enough. There will be notable dryness from eastern Minas Gerais into central and northeastern Bahia; though, this is outside of the most important grain, oilseed, and cotton production areas.

In Argentina, an area of meaningful rain will occur in La Pampa Thursday. Central and northern production areas of the nation will then receive significant rain Friday and Saturday and this may extend down into northeastern Buenos Aires. This rain is still important due to the lengthy period of dryness that will follow it. Rain will likely return to Argentina in the last week of the month. Last evening’s GFS model run showed significant rain in Argentina as early as Jan. 23 – 25. Both the midday and evening GFS model runs showed rain in Argentina Jan. 26 – 28 with last evening’s run wetter.

Wire story had there is no doubt that new-crop Chicago corn and soybean futures have risen to profitable levels for U.S. farmers in 2021, and that should support strong plantings in the spring. But the dwindling domestic stockpiles magnify the impending acreage showdown even further. U.S. Department of Agriculture data suggests domestic corn and soybean stocks-to-use for 2020-21 at 10.6% and 3.1%, respectively, both seven-year lows. Some industry analysts have suggested that with supplies that tight, the United States cannot return to a plentiful situation within the 2021-22 cycle, even with strong harvests. 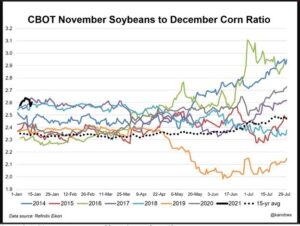 The U.S. biofuel industry expects the outgoing Trump administration to approve most of the waiver requests it has pending from the oil refining industry for 2019, three sources familiar with industry discussions said. The waivers – which exempt refiners from their obligation to add ethanol to gasoline – have been at the center of a contentious debate between the oil and corn lobbies.

The U.S. soybean crush likely rose in December to the second-highest level on record for any month, capping the busiest year of processing ever for the industry.

China’s soybean imports jumped 13% to an annual record in 2020, customs data showed on Thursday, after crushers ramped up purchases amid improved margins and healthy demand from the country’s rapidly recovering pig sector.

China bought 100.33 million tonnes of the oilseed in 2020, up from 88.51 million tonnes in 2019, according to the General Administration of Customs. For December alone imports came in at 7.524 million tonnes, down 27% from 9.54 million tonnes a year ago and down also from November’s 9.59 million tonnes. December soy imports were lower than expected, probably due to shipping delays,” said analyst with agriculture consultancy Cofeed. But the annual figures matched expectationsas demand was good while China brought in more U.S. cargoes. China has been rebuilding its pig herd, which was ravaged by the deadly African swine fever disease, with the pig population now approaching normal levels, according to state media.

Crushers bought Brazilian soybeans early in 2020, and turned to U.S. cargoes in the fourth quarter when American beans hit the market, and as Beijing stepped up purchases of U.S. farm produce to meet the terms of China’s trade deal with the United States. China’s 2020 U.S. soybean imports were up 56.3% from a year earlier in yuan terms.

The coronavirus dealt a blow to global trade in 2020, but not in China, where exports rose last year to their highest level on record, officials said Thursday–positioning it as the only major world economy to grow during the pandemic-scarred year. For the full year, Chinese exports rose 3.6% from a year earlier to a record $2.6 trillion, according to data from China’s General Administration of Customs. China’s robust economic recovery also propped up demand for imports, which fell by just 1.1% in 2020, resulting in a $535.03 billion trade surplus for the year–the biggest since 2015.

Brazil soymeal exports ended near record highs in 2020 while Argentina exports down near 25% – Refinitiv Commodities Research.

Argentina shipped only 72 thousand tons of soyoil in December due to the port strikes, which brought total soyoil exports in 2020 to 3.7 million tons, compared to 4.0 million tons for 2019.

2020 Russia soyoil and soymeal exports ended at 0.8 and 0.9 million tons, respectively. Both are the highest annual exports over the past four years.

Asia’s chicken farmers are confronting the region’s worst bird flu outbreak in years, with the deadly virus affecting farms stretching from Japan to India, roiling some poultry prices and showing no signs of easing. More than 20 million chickens have been destroyed in South Korea and Japan since November. The highly pathogenic H5N8 virus last week reached India, the world’s No. 6 producer, and has already been reported in 10 states.

Argentina’s wheat harvest is expected to be 17 million tonnes, up from the 16.5 million estimated in December, boosted by record yields in southeast Buenos Aires province, the Rosario grains exchange (BCR) said on Wednesday. Recent rains have also helped improve the state of the country’s crops ahead of the 2020/2021 harvest, a welcome relief for farmers following a prolonged drought during the southern hemisphere winter.

Argentine farmers called off a three-day-old sales strike on Wednesday, hours before it had been scheduled to end, after the government agreed to free corn export from a recently decreed limit of 30,000 tonnes a day.

Russia may impose a higher export tax on wheat and set one on barley and corn from mid-March, its agriculture ministry said, in a renewed push to curb domestic food price growth. A review by Moscow officials of previously approved state measures to slow down food inflation has supported wheat futures in Paris on expectations that European Union wheat would benefit from a higher Russian tax.

Ukrainian milling wheat export prices have continued to rally this week, supported by an upward trend on the Russian market and a decrease in expected global wheat output, analyst APK-Inform said; bid-ask prices for 12.5% protein soft milling wheat added $4-$6 a tonne on Wednesday, reaching $280-$287 FOB Black Sea. Prices for 11.5% protein wheat also rose by $4-$6 to $278-$285 as of Jan. 13, the consultancy said in a report. The consultancy last week said that Ukrainian milling wheat export asking prices hit a six-year high at $268 a tonne FOB Black Sea on high demand from exporters and a significant rise Russian grain prices. Ukraine plans to export 17.5 million tonnes in the 2020/21 July-June season. It had exported 12.51 million tonnes of wheat as of Jan. 6.

All Ukrainian Black Sea ports have resume grain cargo operations suspended on Wednesday due to poor weather, the state-run Ukrainian sea port authority said; Ukraine accounted for about 16% of global grain exports in the 2019/20 season.