In Brazil, conditions will still be favorable for crop development in most of the nation. There will be some pockets that are drier than preferred, such as in southern Rio Grande do Sul, northeastern Bahia, and possibly some of western Mato Grosso do Sul; however, the bottom line is good for much of the crops. Temps seen below average in the south, above in the north over the next 10 days.

In Argentina, a very important rain event is still expected Friday which will impact southern, central, and northeastern production areas of the region. Some pockets of Buenos Aires and far western production areas of the region will get disappointing amounts; however, the rain will at least lead to some temporary reduction in dryness concerns. Huge improvements are not expected in the next two weeks and dryness in week 2 of the outlook will lead to some increase in crop stress, especially in the pockets that miss out from much rain this week. Temps seen running below average over the next 10 days

China soybean imports will remain strong through early next year, amid high imports from the U.S. – Refinitiv Commodities Research

Refinitiv’s trade flows tracked 9.7 million tons of soybean arrivals to China during November, the highest volume over the past three years during this time. Among them, 6.8 million tons (70%) were shipped from the U.S., doubling October’s U.S. soybean imports. Over the next two months, China soybean imports will remain strong amid large U.S. soybean arrivals. In December, imports from the U.S. will continue to increase to 7.6 million tons. Meanwhile, 6.9 million tons of U.S. soybeans are underway and will arrive in China in January. More January arrivals will be reported later. Soybean imports from Brazil will remain well below levels over the last two years during the next two months. December arrivals from Brazil will likely decline to 1.6 million tons and January arrivals will be near zero. Imports from Argentina and Uruguay will also stay minimal in December and January. 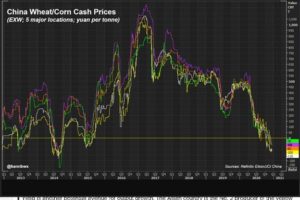 The de facto U.S. embassy in Taiwan on Thursday decried “disinformation” from politicians about food safety, amid a contentious decision by the island’s government to allow imports of U.S. pork treated with a leanness-enhancing additive. President Tsai Ing-wen’s decision in August to allow imports of U.S. pork containing ractopamine, which is banned in the European Union and China, has roiled Taiwan politics.

China’s state planner has set the minimum purchasing price for wheat in 2021 at 2,260 yuan ($338) a tonne, up 0.9% from 2,240 yuan/tonne this year. China buys wheat from farmers at the minimum price when the market price drops below that level. The National Development and Reform Commission said separately that it had set the volume of wheat to be purchased at minimum price next year at 37 million tonnes, unchanged from the 2020 level. ($1 = 6.687880 Chinese yuan renminbi)

Wire story commented China in recent years has been notoriously absent from global corn trade, particularly when compared with its consumption rates, in its efforts to bolster food security and maintain self-sufficiency. However, Chinese corn prices surged this year as stockpiles dwindled, forcing the country to scoop up large quantities of foreign corn, especially from the United States. China is now on the path to becoming the top importer of the yellow grain next year. The question now is whether the Asian country plans to permanently cement itself as a top corn importer, whether the government will attempt to boost domestic production, a combination of both or none of the above.

Brazil and China are in talks to boost corn trade between the two nations, though raising exports to the Asian nation at this time is unfeasible due to inter-harvest supply shortages; only a fraction of Brazil’s corn sales went to China last year, or 68,550 tonnes, according to Brazilian government data. Total exports were 42.7 million tonnes in the period. By comparison, China bought almost 80% of Brazil’s soy, or 58 million tonnes last year. Brazil was close to an agreement that would allow the nation to boost sales of the cereal to China, which needs it to feed a growing hog herd.

The Brazilian Senate unexpectedly approved a bill late on Tuesday to facilitate the purchase and leasing of rural properties in Brazil by foreign nationals or foreign companies. The legislation must be approved by the lower house of Congress before the president can sign it into law. If passed, the legislation could attract investments in agriculture and other sectors such as wind and solar energy farms, along with mining.

Argentine grains inspectors and oilseed workers extended a wage strike into Wednesday after days of failed contract negotiations with the companies that make up the country’s key soymeal export sector. The Urgara union of grains inspectors and the federation of oilseed workers went on strike last week to demand salary increases sufficient to keep up with the country’s high inflation rate. Consumer prices rose 3.2% in November, down from 3.8% in October. Inflation was 30.9% in the first 11 months of the year, according to official data.

Insufficient rainfall across key producing areas of the central Pampas fractionally lowers 2020/21 Argentina corn production to 45.0 [39.4–49.6] million tons, despite decent planting progress so far. Our current estimate puts planted area at 6.4 million hectares, slightly above 6.3 million hectares reported by Bolsa de Comercio in Buenos Aires, but below the Bolsa de Comercio in Rosario’s 7 million hectares. As of last week, corn planting was 63% complete nationally according to the Ministry of Agriculture. Bolsa de Cereales in Buenos Aires also reported planting progress of 47% for commercial corn. These estimates indicate that Argentine corn planting is currently running close to normal at the national level (compared with the 64% five-year average).

Grain exporters look unlikely to accelerate shipments of Russian wheat before an export tax is implemented in mid-February, with farmers expected to be in no rush to release supplies, particularly given poor prospects for next year’s harvest. The planned levy has triggered volatility in international prices as the market has tried to figure out whether this could curb exports, or boost them, from leading supplier Russia. The tax, formally adopted on Tuesday as part of efforts to stabilise food prices, will add 25 euros ($30.46) a tonne on wheat exports from Feb. 15 until the end of the marketing season on June 30. There has been market talk of a short-term rise in Russia’s export sales so wheat can be shipped before the tax takes effect, but much less competitive offers of Russian wheat in a tender held by Egypt on Tuesday suggest that may not happen. After being reluctant sellers earlier in the season as they benefitted from high prices, farmers may now resist releasing grain more cheaply.

Ukrainian agrarians sowed winter crops in 2020 on an area of 8.07 million hectares, according to the Economy Ministry, this is 9.3%, or 830,000 hectares, less than the statistics from the State Statistics Service last year. Referring to the data of the regions, the Economy Ministry said that this year the agrarians allocated by 4.7% less area for winter wheat only 6.1 million hectares, for winter barley by 4.5% less, or 954,700 hectares.

Ukraine’s parliament on Thursday cut value-added tax (VAT) on some types of agricultural goods, grains and oilseeds to 14% from the current 20% in a bid to help local food producers. The cut will apply to livestock, wheat, barley, corn, oats, rye, soybeans, rapeseed, sunflower seed, sugar beet and some other commodities. “Processing companies will be able to save 6% of costs when purchasing products due to the lower tax liabilities of producers,” the authors said in the explanations to the draft law.

Acting Prime Minister of Kyrgyzstan has instructed the Agriculture Ministry to work through the issue of importing 400,000 tonnes of wheat from Russia as part of ensuring the country’s food security, the press service of the Kyrgyz government said in a statement following a meeting on Wednesday.

Euronext wheat fell in step with Chicago on Wednesday as futures faced chart resistance and traders waited for clearer signs on how an export tax planned by Russia may affect international supply. March milling wheat settled 1.50 euros, or 0.7%, lower at 205.75 euros ($250.46) a tonne.

Indonesia spent more on biodiesel subsidies than funds it collected through export levies this year; BPDP, the government body in charge of subsidising Indonesia’s palm oil programmes, estimated 17-18 trillion rupiah had been raised from levies this year, while 25.7 trillion rupiah ($1.82 billion) had been spent subsidising the price difference between crude oil and palm oil, he said.