Malaysian palm oil prices were down 62 ringgit at 2,799 (basis December) at midsession, a two week low as weaker rival vegoils, rising output, and political uncertainty weighed on the market.

South America Weather Forecast: The weather outlook in most production regions is unchanged; showers and a few thunderstorms are still expected in center west and center south Brazil over the near term which will begin to moisten the topsoil moisture a little; greater rainfall will be needed though to promote better flowering conditions. Seasonal showers normally begin in center-south and center-west Brazil during the second half of September. This week’s scattered showers were thought of as being the start of seasonal precipitation. However, a drier than usual weather pattern is expected over the next ten days to two weeks and could last a little longer.

Europe/Black Sea Region Forecast: The forecast has not changed with most of the European continent getting rain at one time or another during the next two weeks. The moisture boost will prove favorable for winter crop planting in many areas. Relief in parts of Ukraine from dryness will help improve winter crop planting conditions, although more rain will be needed.

U.S. ethanol production last week sank to a 12-week low, but the running deficit versus previous years has been shrinking over the last month, bringing output slightly closer to normal levels; implied ethanol consumption is off from recent highs, but its year-on-year deficit has also contracted; U.S. gasoline demand is declining in line with seasonal trends, though there has been no recent improvement in its departure from normal levels. 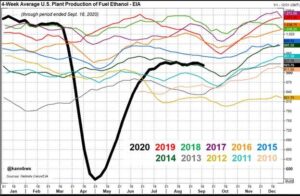 U.S. hogs/pigs report to show herd steady from year ago -survey – Reuters News (The USDA report is due at 2 p.m. CDT on Thursday).

The cost of China’s much-loved pork rib dishes is soaring after Beijing suspended imports of pigmeat from major supplier Germany, hurting restaurants still recovering from the coronavirus hit earlier this year; pork ribs are one of China’s best-selling menu items but many restaurants specializing in the cut rely on imports, which can be up to 10 times cheaper than local supplies.

The prices of live pigs in China declined 4.1 percent in mid-September compared to the previous 10 days, data from the National Bureau of Statistics (NBS) showed; since last year, China has implemented a string of policies to stimulate hog production and stabilize pork prices affected by African swine fever and other factors.

Argentina’s upcoming soy and corn crops will be smaller than last season’s due to dry weather and capital controls that are hurting farmers’ profits, the Buenos Aires Grains Exchange

Russia, one of the world’s largest grain exporters, has harvested 119 million tons of grain before drying and cleaning from 86% of the area with an average yield of 2.89 tons per hectare, data from the agriculture ministry’s analytical centre published on Wednesday showed.

Russia looks set to cement its place as the dominant force in the wheat world; in 20 years, Russia has gone from being reliant on wheat imports to accounting for a fifth of global sales, as its fertile soils generate bigger harvests at attractive prices; more than 100 nations from Egypt to the Philippines buy its grain, and Russia has sought to extend that list by adding markets where its wheat has been excluded because of rules over grain quality.

Only 10% to 15% of Ukrainian area is suitable for sowing winter crops for the 2021 harvest due to severe drought which is increasing, the APK-Inform agriculture consultancy said; forecasters, who last week called the weather conditions the worst in 10 years, said they expected no rain in the next 4 days in Ukraine; Ukraine traditionally starts winter grain sowing in early September but this year farmers have not yet started due to drought.

Rains that could help the sowing of winter grains in Ukraine are expected this weekend, data from weather forecasters showed on Thursday; the rain is likely to cover most regions and last at least two days, the data show.

Euronext wheat edged down on Wednesday as a sharp fall in Chicago encouraged Paris prices to consolidate after a five-month high a day earlier; front-month December milling wheat settled down 0.75 euro, or 0.4%, at 194.00 euros ($226.71) a ton; the contract had risen on Tuesday to 195.75 euros, its highest since April 23, but faced chart resistance around that level.

German pig prices remain unchanged this week at 1.27 euros per kilogramme despite uncertainty about demand following a series of import bans after a case of African swine fever (ASF) was found; pig prices had been around 1.47 per kg slaughter weight before the ASF case was confirmed on Sept. 10 and had fallen to 1.27 euros a kg on Sept. 11.