Malaysian palm oil prices were up 9 ringgit at 2,623 (basis November) at midsession supported by firmer soyoil and crude oil prices.

The 11 to 16 day forecast for the Midwest has a bit less than average rainfall for the region and below average temps; temps may be flirting near 32 degrees in far northern sections of the Midwest by the end of the period.

Rains will begin to affect the Delta from Hurricane Laura later today and into tomorrow with the heaviest rains looking to fall west of the main growing regions but, growing areas of eastern LA, eastern AR, and western MS may see some moderate to good rainfall amounts; the 6 to 10 day returns with light to moderate rainfall for most of the region.

The U.S. Department of Agriculture (USDA) on Tuesday said Chinese importers bought more U.S. soybeans and booked their largest single-day U.S. corn purchase in nearly a month as Washington and Beijing reaffirmed their commitment to their Phase 1 trade deal.

Wire story reports the U.S. corn harvest is about a month away from ramping up, but there is more uncertainty over production outcomes than there has been all season after prolonged dry weather and a severe windstorm damaged crops in the heart of the Corn Belt; on Monday, the Department of Agriculture slashed U.S. corn conditions to 64% good-to-excellent, more than analysts expected and a 5-point fall on the week; top producer Iowa fell 9 points to 50%, well below the five-year average of 73% for the week.

Democratic presidential nominee Joe Biden threw his support behind U.S. laws that require oil refiners to blend biofuels into the nation’s fuel pool and criticized the Trump administration for its handling of the mandates; a Biden-Harris Administration will promote and advance renewable energy, ethanol, and other biofuels to help rural America and our nation’s farmers, and will honor the critical role the renewable fuel industry plays in supporting the rural economy and the leadership role American agriculture will play in our fight against climate change,” Biden said. 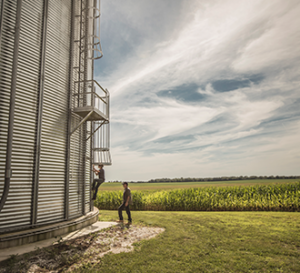 Manitoba crop report: Harvest across much of Manitoba has been periodically interrupted by rain showers, resuming two to three days later; high humidity has limited harvesting hours in some parts, with grain dryers operating in the Interlake region; late-season dryness together with high heat has prompted premature ripening in some soybean and corn fields where soil moisture was inadequate; reported wheat yields to date have been average to slightly below average, given stresses faced by all crops this spring; oats and barley yields are average to above average; overall harvest is 13% complete.

China’s soybean imports from top supplier Brazil surged in July from a year ago, customs data showed on Tuesday, as cargoes bought on the cheap in recent months arrived in the country; they brought in 8.18 million tons of the oilseed from Brazil in July; that was up 27% from 6.42 million tons in July 2019, but lower than the record 10.51 million tons of soybeans imported from the South American country in June.

For the month of July, Chinese importers brought in 10.09 million tons of soybeans overall, driven by good demand from the livestock sector as farmers expanded output to plug domestic pork shortage.

National soymeal stocks also rose to over 1.2 million tons earlier this month, the highest since August 2018, and up from a record low of 139,000 tons in April.

China’s food supplies remain stable and consumers should not be “overly anxious” or even resort to “panic buying”, a senior agriculture ministry official said, following recent uncertainty caused by the coronavirus pandemic; still, farmers and traders should prevent food waste caused by improper storage, while farmers who stockpile in the hope of later gains should be wary that prices could turn against them

Brazilian food producer Central Cooperativa Aurora has voluntarily suspended poultry exports to China from one of its plants starting Aug. 20, the Chinese customs authority’s website showed; the company, which is Brazil’s third largest pork and poultry processor, confirmed the decision to halt sales, but did not elaborate; the plant in the town of Xaxim, in Santa Catarina state, is identified by its SIF registration number 601, the same plant had been blocked by Hong Kong earlier this month over coronavirus concerns.

Brazilian farmers will produce record harvests of soybeans and corn in the upcoming 2020-2021 growing season as good prices for both crops spur growers to increase the area planted, according to crop agency Conab

The Brazilian government on Tuesday revised data on the country’s seven previous soybean crops, altering the estimated production in the world’s largest supplier and exporter of the agricultural commodity; the revision, detailed in a statement from food supply and statistics agency Conab, showed an increase of 14.4 million tons in Brazilian soybean output over the seven years, most of it in the previous three seasons.

Russia has harvested 90.7 million tons of grain before drying and cleaning from 57.5% of the area with an average yield of 3.29 tons per hectare, data from the agriculture ministry showed.

The European Union lowered its duty on maize (corn) imports to 0.26 euros ($0.31) per ton, from 5.48 euros/ton previously, the bloc announced, after U.S. corn price rise.

European wheat prices rose on Tuesday, supported by strong international demand and rising U.S. markets on hopes a U.S.-China trade deal could boost demand for U.S. grains; benchmark Euronext December milling wheat was up 0.8% or 1.5 euros at 184.00 euros ($217.32) a ton.