Overnight trade has SRW Wheat unchanged, HRW up 2; HRS Wheat up 2, Corn is up 2 cents; Soybeans unchanged;  Soymeal unchanged, and Soyoil up 10 points.

South America Weather Forecast: The Brazilian growing regions still has little rainfall for most areas except for central/east (light amounts for northern Rio Grande do Sul, Santa Catarina, and southern Parana) through Friday. Rainfall looks to develop in the north over the weekend favoring the state of Mato Grosso with light to moderate amounts. The 6 to 10 day forecast does have rainfall developing north of Parana with light to moderate amounts and 85% coverage. The Argentine growing regions has mostly dry weather over the next 10 days with some light rainfall in Buenos Aries later in the weekend.

Europe/Black Sea Region Forecast: No serious changes were noted this evening, although there was some reduction in Italy rainfall October 17-19; the GFS model runs offered a few more showers in eastern Ukraine and the middle Volga River Basin relative to the mid-day model run; the change was minor, but any rainfall in these areas would be welcome.

U.S. ethanol exports in August scaled 35% higher to 100.7 million gallons (mg), the largest volume since March; shipments across the border to Canada accelerated 20% to a three-year high of 36.0 mg, equivalent to 36% of total U.S. ethanol exports, while sales to India declined by 20% to 10.5 mg.

Wire story reports U.S. agricultural exports to China had a sluggish start to 2020 relative to the lofty expectations set forth by the Phase 1 trade agreement, but the August value soared substantially over that of the prior months owing to strong soybean shipments; U.S. cotton exports to China hit a seven-and-a-half-year high in August, while corn shipments to the Asian country reached an all-time record; but the combined export value of cotton and corn, the No. 2 and 3 items in August, was less than half that of soybeans, emphasizing the importance of the oilseed in the trade relationship. 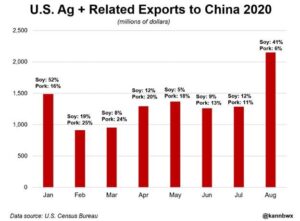 Manitoba crop report – Reuters News: Harvest completion sits at 88%, well ahead the three-year average of 76% at this time; fall fieldwork continues on harvested fields, surface ditching is common; tillage progress has been steady, though dry topsoils across the province are leaving some fields very cloddy and rough; rapid progress in soybean harvest occurred last week, with many producers finishing and starting corn, if they have.

Argentina’s new export tax regime that leaves a higher levy on soybeans than processed soyoil and soymeal has some farmers complaining that they are subsidizing the country’s vast oilseed crushing industry and say it won’t spur growers to sell more; the government last week cut export tax rates on soy and its by-products until the end of the year in a move to encourage more exports and raise much-needed dollars; with prices rising, farmers had been holding onto soy crops waiting for a better time to sell.

Russia could boost poultry meat exports 45% to more than 300,000 tons this year, according to Russian Agricultural (RusAg) Bank’s Center for Industry Expertise; the experts said that attainment of this indicator would mainly depend on maintenance of a positive tendency for supplies to the four most important markets – China, Kazakhstan, Ukraine, and Saudi Arabia; Kazakhstan and Ukraine are traditional markets for Russian poultry farmers; supplies to Saudi Arabia began in 2018; exports to China have been developing since last year.

Rains across much of Ukraine have improved conditions for the winter grain sowing, reducing concerns about the 2021 grain harvest after a severe drought, APK-Inform consultancy said; sufficiently heavy rains in the last days of September and early October ended the long-term air-soil drought in most regions of Ukraine and improved conditions for sowing and the development of winter crops; weather forecasters said this month the weather conditions in Ukraine were the worst in 10 years and only 10% to 15% of arable land was suitable for sowing winter crops for the 2021 harvest because of the severe drought; Ukraine’s economy ministry issued its first official information on winter sowing in late September, saying that only 1.5 million hectares, or 25%, of the expected winter wheat area, had been sown as of Sept. 28.

Euronext wheat futures rallied on Tuesday to hit the 200 euro mark as dry weather in several exporting countries fueled a broad rally in grain markets; December milling wheat settled 2.25 euros, or 1.1%, up at 200 euros ($235.54) a ton; it earlier climbed to 201 euros, a new life-of-contract high and the highest spot price in nearly five months; dry sowing conditions in Russia and the U.S. Plains again supported a sharp rise in Russian and U.S. wheat futures.