Malaysian palm oil prices were down 77 ringgit at 2,712 (basis December) at midsession tracking the drop in crude and soyoil prices.

South America Weather Forecast: The Brazilian growing regions still has moderate rainfall for mostly Rio Grande do Sul over the next 10 day period with little rains elsewhere. By next weekend, light to moderate rains look to expand to areas north-central but still dry in the rest of the growing regions.  The Argentine growing regions over the next 6 to 10 day period sees light rains to fall in most areas with some better precip amounts possible in the southern growing areas.

Europe/Black Sea Region Forecast: Not much change; plenty of rain seen in Western Europe over the near term. Eastern areas only receive light amounts of rain.  Not much change; not much hope of drought relief in Russia’s Southern Region; any further relief in Ukraine is confined to the next three days favoring western portions of the nation; showers in the southern Balkan Countries will be welcome and temporarily beneficial to winter crop planting and establishment in the region, but brief delays to fieldwork will result through the weekend.

For the week ended September 24th, U.S. All Wheat sales are running 8% ahead of a year ago, shipments up 4% with the USDA forecasting a 1% increase on the year

For the week ended September 24th, U.S. Corn sales are running 154% ahead of a year ago, shipments 71% ahead with the USDA forecasting a 32% increase

For the week ended September 24th, U.S. Soybean sales are running 169% ahead of a year ago, shipments up 64% with the USDA forecasting a 27% increase on the year

Wire story reports the new U.S. corn and soybean marketing year is just a month old, and the progress toward meeting big annual export targets is more advanced than normal in terms of sales, largely due to strong Chinese demand; U.S. corn and soybean export bookings stand at record levels for this early stage, and that bodes well for the expectation that 2020-21 shipments will rebound sharply from the dismal year-ago levels. 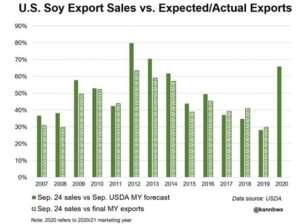 Saskatchewan crop report: Conditions remained relatively dry throughout the province, allowing farmers to continue to make significant harvest progress; eighty-nine per cent of the crop has been combined, up from 77 per cent last week and well ahead of the five-year (2015-2019) average of 67 per cent for this time of year; an additional nine per cent of the crop is swathed or ready to straight-cut.

Argentina has temporarily cut soybean, soymeal and soyoil export taxes by 3 percentage points to 30% to help stimulate export revenue, the government announced, as the country struggles with recession and dwindling foreign reserves; the tax cut will last until the end of the year before being restored to 33% in January; we seek to strengthen the country’s international reserves; but farmers and analysts said the move might not be enough to significantly boost selling by growers and generate much-needed export dollars as the government heads into debt renegotiation talks with the International Monetary Fund.

Rising domestic prices for wheat, sunflower oil and sugar will lead to higher bread prices in Ukraine, Interfax Ukraine news reported, citing the Ukrainian bakers association; Ukraine is among the world’s major producers and exporters of wheat and sunoil and its exports largely exceed domestic consumption; the Ukrainian bakers association said the cost of wheat had jumped 40% this year, including a 25% rise in September

Euronext wheat edged lower on Thursday in step with Chicago, with farmer sales helping curb prices after a day-earlier jump triggered by lower than expected estimates of U.S. grain stocks; benchmark December milling wheat on Euronext settled down 0.75 euro, or 0.4%, at 197.00 euros ($231.36) a ton; it earlier ticked up to 198.50 euros, a new two-year peak for the contract and a fresh 4-1/2 month high for a spot price; Wednesday’s rally, which saw Euronext add nearly 3% while Chicago wheat climbed 5%, prompted selling by producers in Europe.

Asian demand for Australian wheat is expected to bounce back in the months ahead as the country is estimated to produce its biggest crop in four years, offering stiff competition to suppliers in the Black Sea region; around 1.5 million tons of wheat is scheduled to be shipped out of Australia in December with more than one million tons heading to Asian destinations led by China, the Philippines and Vietnam.

Malaysia is anticipating the United States to ban the imports of another plantation firm, after the U.S. Customs and Border Protection (CBP) agency blocked entry of palm oil products from FGV Holdings over forced labor allegations; another big firm will be banned soon, the Human Resources Minister said; he declined to name the company, but said it was a large firm within the plantation sector; industry analysts warned that the ban on FGV could lead to buyers in other countries turning away from the company or shunning Malaysian palm oil.